ProE is a fully parametric modeling software and if not understood properly, can lead to havoc!

This option allows us to change the parent-child relations.. (yaa.. There is no blood relation in ProE.. Only type restrictions.. I mean if you have a datum plane as parent and you want to change the parent, you can have another one but only another datum plane and not an axis.. Something like racism! Bad comparison! May be, but I will stick with it for the rest of this posting )

What all I can do with it:


How do I do it:
A) Getting a different parent 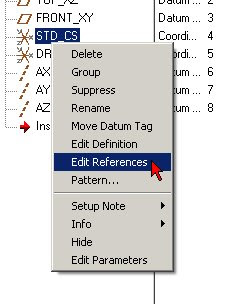 (if you say YES, then model will be rolled back to a position when the feature is created. I like to say no. But its personal preference)

Now ProE will ask for each reference of the feature, to retain the reference or have a new one. ("SAME REF" or "ALTERNATE" respectively)

I think you can take over from here….


B) Changing the children

This is more interesting & powerful.

As in section (A), right click the child feature. Select "EDIT REFERENCES"
Select No to the prompt "Do you want to roll back the model" (here it doesn't matter, actually. Either way it will be NO)

Here you have two options. To put it simple, Select "INDIV ENTITY" if your reference(s) is as geometry element like surface or edge. Otherwise select "FEATURE" for reference(s) like C_SYS, DATUM PLANE..

Now you have to select the current parent and new parent.

For donating one child you can use the options "REROUTE FEAT" which is more simpler.

Extension:
When you select FEATURE (in REPLACE REF) and you select a protrusion as the original parent, then you will be prompted for new parents for each references. Assume, you have two datum planes that are offset from its two surfaces, then ProE will ask you for new references of both surfaces. This is also very useful.

Reroute Feat (A) is the more common one. I think its self explanatory.
Replace Ref (B) is not so common, may be because of the lack of awareness. This is very useful sometimes, when you have model tree running in pages and you want to delete one datum at the top which has numerous children. Its practically impossible to use (A) but its so easy to use (B).

* If you are still confused why I say race, then read all race as "Feature Type"! 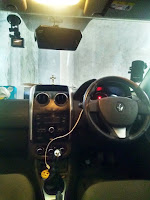